Summary: an Aeolian Harp is connected via a radio transmitter to a Digital Audio Workstation. The acoustic energy of the harp, driven by the wind, is converted to a MIDI signal which is then used in the DAW to energize instrument patches.  The sound of the harp can in this way be converted to, for example, a violin or a flute.  The audio output may also be used to drive a Chladni plate (see below).

Detail: Wind energy stimulates the harp whose strings vibrate creating a quite unearthly sound. The vibrations are picked up by magnetic sensors which convert the signal to an electric current much as the pickups function on an electric guitar. The signal is then transmitted to a remote receiver, amplified, modified by the DAW and fed to a loudspeaker cone to which is attached the Chladni Plate. Fine grains or liquids on the plate resonate in sympathy with the sound vibrations creating corresponding kaleidoscopic patterns.

The sound can be modified via a Digital Audio Workstation and then mixed with a live or recorded accompaniment, created, for example, using a synthesiser. The whole system is described by the flow chart below. This is the experiment that is underway.  The harp has potential for developing as a large scale sculpture.

Flow Chart of the Complete System 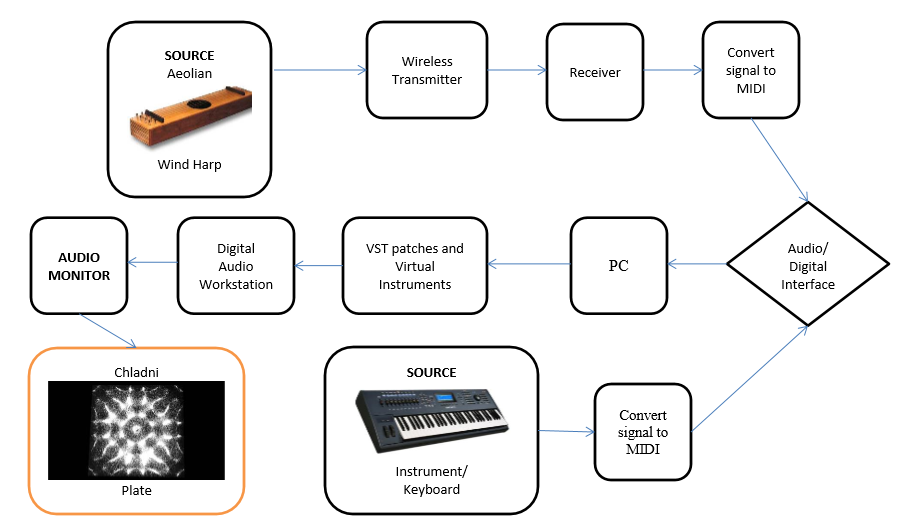